In 2004, the South Dakota Petroleum Release Compensation Fund conducted a study to evaluate and report on the effectiveness of using the triad approach to manage decision uncertainties associated with five petroleum release sites across South Dakota (SDPRCF 2015). The goal of the study was to apply the principals of the triad approach to rapidly characterize the sites, develop accurate CSMs, establish clear clean-up goals and move the languishing sites toward regulatory closure as quickly as possible. A MIP coupled with an electron capture device, photoionization detector, flame ionization detector and Columbia Technologies SmartData Solutions® (Columbia 2019) data processing and visualization platform were selected to allow for real-time assessment and decision making. Standard confirmation sampling was used to verify the rapid site assessment.

Similar to other sites included in the study, the former T&T Standard site was stalled in the assessment process and not moving toward regulatory closure. A release (see Figure 9‑1) was discovered in December 1991, and assessments were performed in 1992, 1993, 1994, and 1999. Three underground storage tanks (USTs) (one 10,000-gallon gasoline, one 8,000-gallon gasoline, and one 3,000-gallon diesel) and about 900 cubic yards of contaminated soil were removed in 1992. Two USTs (one 270 gallon and one 100 gallon) and about 10 cubic yards of soil were removed in 1994. Groundwater monitoring was performed from 1992 to 2003. An additional assessment was required to define the extent and evaluate potential for risk to underground structures (utilities) and city water supply wells. For this study, objectives included the following:

A total of 23 MIP borings were advanced over three days, resulting in approximately 13,000 data points collected over 640 ft of drilling. In addition, three conventional direct-push confirmation borings were installed, resulting in approximately 65 data points over 55 ft of drilling. An abandoned storm sewer filled with waste oil and two previously unidentified USTs were discovered, partially due to the density of data provided by the MIP borings. Additional assessment was required to define extent and evaluate the potential for risk to underground structures (utilities) and city water supply wells.

The major objectives were completed, and a Corrective Action Plan was developed. It was determined that groundwater beneath the site is not hydraulically connected to the drinking water source and not necessary to meet drinking water MCLs. No Further Action status was received in January 2007, slightly over two years after the MIP assessment.

At the former T&T Standard site, as well as the other sites included in the study, the availability of real-time data provided the flexibility to augment the project work plan during the same mobilization, minimizing the need for future site visits to collect additional data. Consequently, the time and costs associated with redundant mobilization and demobilizations, generation of interim reports, revision of work plans, and additional contracting to complete the necessary work were avoided. Of the three sites that had prior assessment data, MIP assessment costs ranged from 15% to 70% less expensive than conventional assessments.

Lessons learned from the triad approach study were as follows: 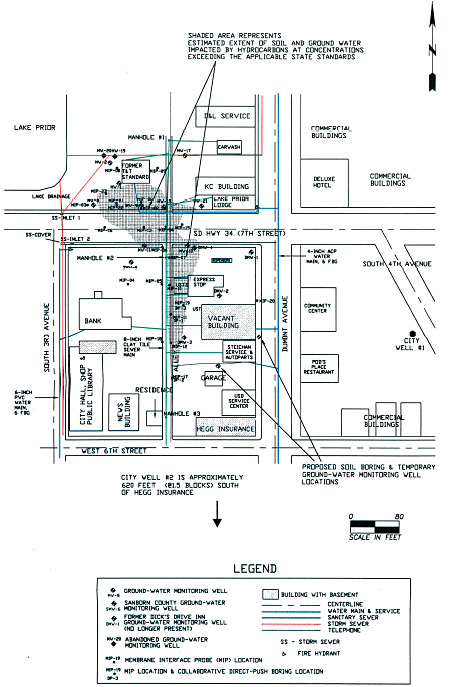