The work was contracted by the MDEQ and observed by representatives from the MDEQ, U.S. Bureau of Land Management (BLM), and Montana Tunnels Mining Company. (Williams et al. 2018) described this sampling event in an inspection report, copies of which can be requested from the Butte, Montana office of the BLM.

The RPAS was flown above a point on the water surface that was believed to overlie the deepest location within the pit lake. Flight 1 lowered a CastAway CTD through the water column that recorded the maximum depth (230 ft) and measured in situ profiles of temperature and electrical conductivity. Temperature and electrical conductivity were uniform throughout the water column, indicating that the lake had recently undergone complete mixing through a process known as fall turnover (see Figure 9‑69).

Based on evidence of homogeneous conditions in the water column, three water samples were collected with uniform sample spacing across the water column. After discussions with MDEQ, sample depths of 0 ft, 98 ft, and 197 ft were targeted for sampling. Flight 2 collected a two litre (2L) water sample from the deepest depth. Flight 3 attempted to collect a sample from the immediate surface of the water, but upon return, the sample chamber contained only 0.6 L. Flight 4 lowered the sampling device a few feet deeper and returned with a 2L sample. Flight 5 collected a 2L sample from the mid-depth of the lake. Postprocessing of pressure transducer data showed the actual sample depths to be 0-, 92-, and 184-ft deep.

The sampling event provided data to meet MDEQ requirements and demonstrated the ability of aerial drones to perform water sampling. Given that the original request for proposals required only two water samples from 10- and 50-ft deep, the sampling team was able to provide an additional sample and significantly greater vertical distribution than requested at no additional charge. Most importantly, use of RPAS water sampling equipment significantly improved safety compared to boat-based methods. The MDEQ accepted the samples for routine monitoring purposes. 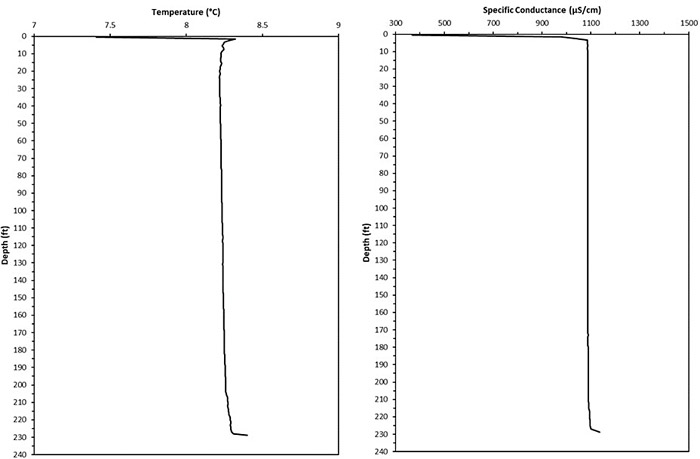