The ERI method, also known as electric resistivity tomography (ERT), is used to noninvasively determine the spatial variations (both laterally and with depth) of the electrical resistivity of the subsurface (see Section 5.2 for details). At the U.S. Department of Energy’s Hanford 300 Facility in Richland, WA, ERI was used to improve the understanding of the hydrogeological framework regulating the exchange of groundwater with surface water. The basic geology of the site is described as a coarse-grained aquifer (the Hanford Formation) underlain by a lower permeability, fine-grained confining unit (the Ringold Formation). The thickness of the Hanford Formation varies between 14 m (45.9 ft) and 17.5 m (57.4 ft) in boreholes close to the Columbia River, with thickness increasing inland. Due to historical nuclear waste processing and disposal at the site, radionuclide-contaminated groundwater may have been discharged into the Columbia River. Of concern is the possible presence of relict paleochannels incised into the Ringold Formation that could act as permeable pathways for contaminants to rapidly migrate from the aquifer into the river. The risks of radionuclide contamination result in a high cost of drilling at this site; ERI is a more cost-effective investigation technique.

Two-dimensional resistivity surveying was performed to investigate variations in the depth to the Hanford-Ringold contact across the site and identify evidence for incisions in the Ringold Formation that might represent paleochannels (see Figure 9‑38). The rationale for applying ERI was the expected strong contrast in electrical resistivity between the coarse-grained Hanford sediment (more resistive) and the fine-grained Ringold sediment (less resistive). A series of parallel, 2-D ERI lines was acquired on 400- to 500-m-long lines using a 5- and 10-m electrode spacing (see Figure 9‑38a). Challenges faced in deploying these lines included steep terrain and high contact resistances due to dry soil. The latter was overcome by watering electrodes with a high-salinity solution.

The resulting images of an approximately 40-m investigation depth clearly defined the Hanford-Ringold contact and identified locations close to the river where the resistivity structure suggests the presence of paleochannels (see Figure 9‑38c). An interpolated plan view showing the elevation of the sharp contrast in electrical resistivity representing the Hanford-Ringold contact (constructed using the 10 2-D transects shown in Figure 9‑38) is presented in Figure 9‑38. This figure also highlights (1) the path of a key paleochannel that coincides with the location of temperature anomalies from distributed temperature sensing (DTS) indicative of pronounced groundwater-surface water exchange, and (2) high uranium concentrations sampled in the river sediment. The DTS was performed using a fiber-optic DTS line placed along the river bed; temperature is inferred by scattering light transmitted along the cable. Uranium contours are based on concentrations measured in the boreholes (see Figure 9‑39) across the site.

The 2-D assumption used in the inversion of the ERI dataset is reasonable for the lines parallel to the river, as evident by the strong similarity in structure between these lines. Simplified logs from two boreholes that were drilled at the site confirm that the imaged depth to the Hanford-Ringold contact is reasonable, given the inherent smoothing and limited resolution of the technology at depth. The results of this survey have been used to improve groundwater flow and contaminant transport models at the site. 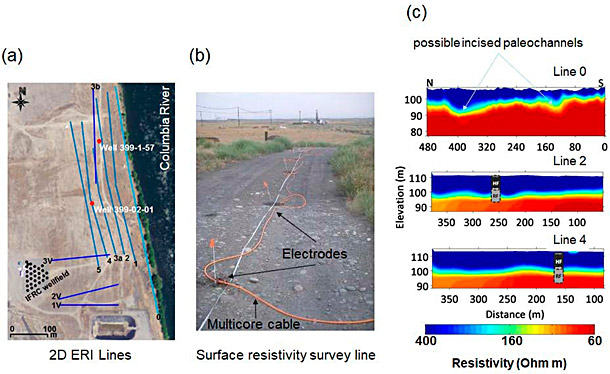 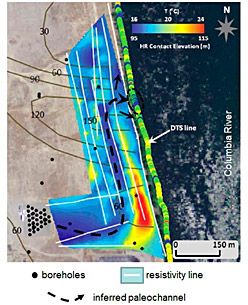