In 2014, the City of Duluth formally enrolled a vacant city lot in the state’s Voluntary Remediation Program. The site, which was planned for redevelopment, is located on a 3.10-acre vacant lot northwest of the intersection of Jay Street and 41st Ave in Duluth, Minnesota (see Figure 9‑42). 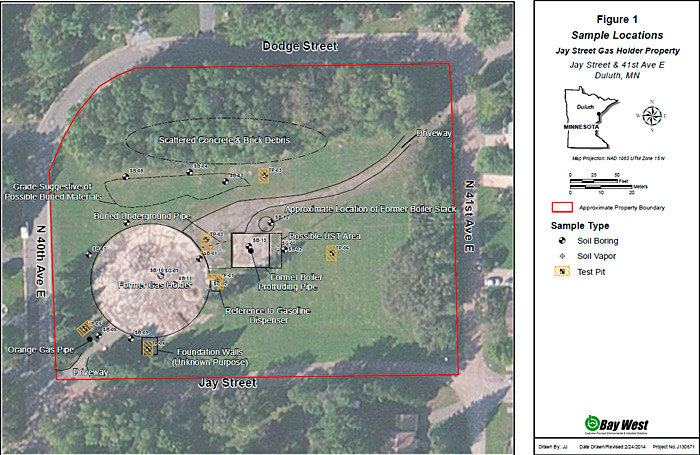 A Phase I Environmental Site Assessment (ESA) (BayWest 2013) noted that the site was previously occupied with a gas holder (a facility used to provide storage in connection with manufactured gas plants). The gas holder was on-site from approximately 1923 until 1960 when the facility was demolished and the associated equipment may have been partially buried on site. Historical documents indicate that the location of the actual manufacturing gas plant site was located miles away. Exact building specifications and demolition information of the gas holder are unknown.

A Phase II ESA, conducted to prepare a Response Action Plan (RAP) for the project, noted that site geology consists primarily of sand and gravel with layers of silty sand, sandy silt, silty clay, and silt. The report also noted that bedrock was not encountered in borings placed as deep as 20 ft below ground surface. Investigation work encountered groundwater at depths ranging from 3 ft to 17 ft below ground surface.

In October 2013, a site reconnaissance was conducted as part of due diligence efforts. (BayWest 2013) noted building debris in the wooded area directly north of a former boiler and an area of elevated ground surface consistent with the description of where chimney debris associated with the former gas holder would have been buried. Because the extent of buried debris and demolition material was unknown, a limited GPR investigation (see Figure 9‑43) was conducted in November 2013 to assess the location of this material. GPR was selected based on its ability to noninvasively provide images of man-made objects in the near subsurface. 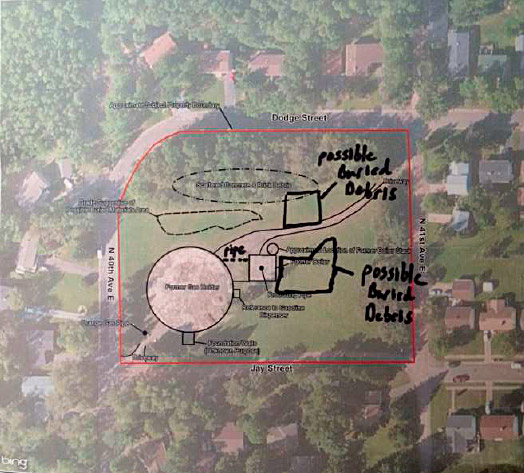 Figure 9‑43. GPR investigation area, as presented in report from contractor.

Scans were collected with the GPR unit in parallel lines approximately 3 ft on center. The GPR unit was able to detect to approximately 4 ft below ground surface. The assessment revealed two locations with possible buried debris at depths of 2 ft to 4 ft below ground surface (see Figure 9‑44 and Figure 9‑45) near test pits TP-03 and TP-06 (see Figure 9‑42 for test pit locations). The data images in Figure 9‑45 for TP-06 were from scans performed just east of the former boiler room. The GPR equipment consistently picked up images of either fill material or disturbed soil in this area. The cost of this assessment was $3,200. 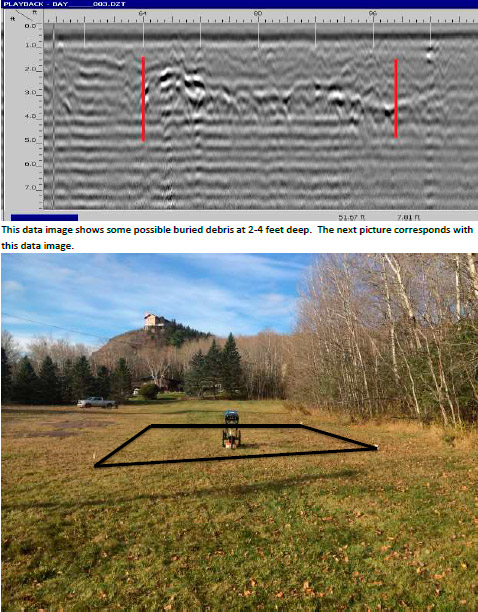 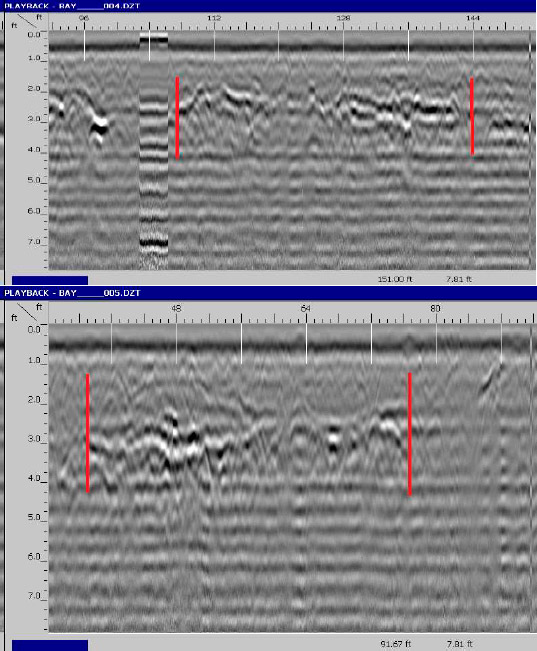 Data obtained from the GPR assessment and test pit excavation were used in conjunction with supplemental soil and groundwater data to develop a RAP, (BayWest 2016). Response actions included soil stabilization, excavation, and disposal, removal of concrete and asbestos containing material, and the removal of debris comingled with soil (BayWest 2016).

The city representative noted that while the tool was effective at identifying features in the survey area, a significant amount of material had been overlooked and was discovered during redevelopment (BayWest 2016). The suspicion was that overlooked material was not due to technology failure, but because a portion of the site had not been investigated with the tool. The discovery of overlooked material and associated costs resulted in project overruns and a fair amount of bad will among project stakeholders.