9.18 High-Resolution and Thermal Aerial Images Identify Mine Openings at an Abandoned Colorado Mine

An abandoned mine in Colorado ceased operation in the 1980s and has remained vacant for the past several decades with a recent addition of a water treatment facility to decrease acid mine drainage. In Spring 2018, an investigation was conducted to identify all mine openings and subsidence features to restrict both access to the mines and the production of acid mine drainage water.

To improve the spatial accuracy of the data collected and allow the imagery to be used with existing maps and drawings, 18 ground control points were captured using a high-precision GPS unit (TrimbleGeoXH). High-resolution visual, aerial imagery of the site was collected using a multirotor DJI Phantom 4 Pro. DJI Goggles (see Figure 9‑65) were used for oblique photography and video inspections on the side of vertical cliff faces. The DJI goggles consist of two high-quality screens that sit in front of the pilot’s eyes and allow control of both photo and video capture. To capture temperature differences between mine openings and the surrounding topography, thermal imagery was collected using a Matrice 210 quadcopter fitted with a Zenmuse XT infrared camera.

The Zenmuse XT camera was selected to identify areas with thermal contrast between the mine openings and the surrounding ground. The thermal characteristics of open mines increase between 0.5°C to 1°C in contrast to surrounding ground surface temperatures. The agility of the quadcopter and use of DJI goggles allowed the many mountainous features across the site to be visually inspected (see Figure 9‑65). The combination of geolocated, oblique thermal images, visible spectrum images, and nadir thermal and visible spectrum imagery provided detail that is generally not available from areal maps or aerial photographs from airplanes or satellites.

The survey was initiated at a known mine opening to calibrate the equipment to the temperature of the air leaving the mine. To ensure compliance with FAA guidelines in 14 CFR part 107 (FAA 2018), a preflight airspace check was completed using Skyward (Drone Fleet Management software solution). Data collection planning and processing were facilitated by the cloud-based processing software DroneDeploy and Drone2Map. 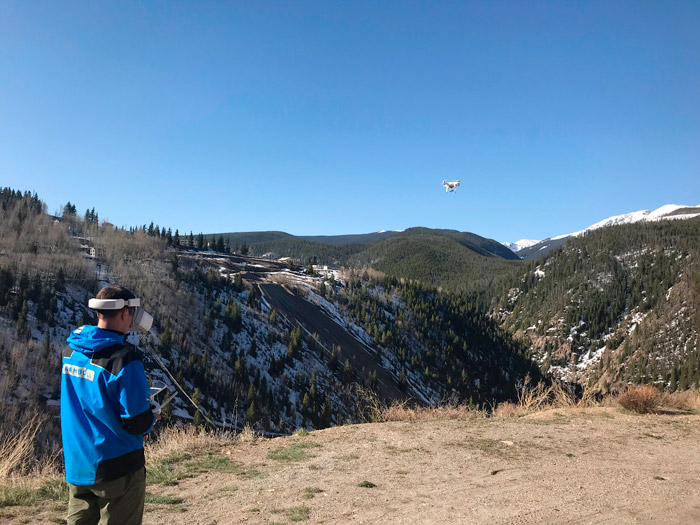 Multiple flights occurred over more than 450 acres during a five-day period between April 23 and April 27, 2018. Historic maps and reports were digitized and used for flight data collection planning. During flight, a series of geolocated infrared and visible spectrum images were captured for each mine feature documented in the inventory as well as for previously unidentified potential mine features based on thermal and visible anomalies. In total, more than 1,500 individual thermal images and 2,000 individual visible spectrum images were captured. These images were processed using DroneDeploy and Drone2Map to create two high-resolution composite images: one for the thermal spectrum and one for the visible spectrum. Additionally, these images were used to create a 3-D model and a digital surface model (DSM). To produce a DSM, vegetation and buildings were removed and replaced with an interpolated surface (see Figure 9‑66). 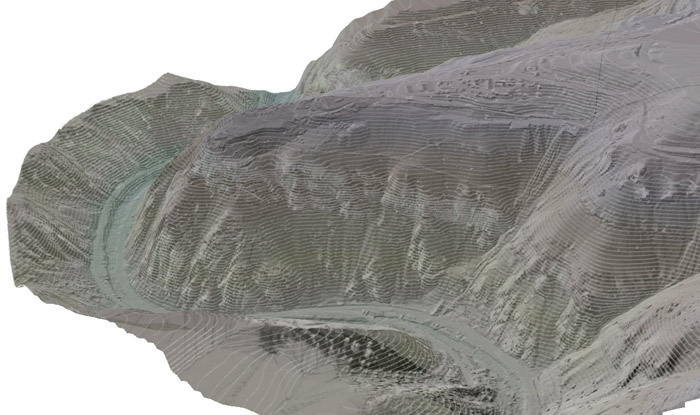 Accuracy was reported as the optimized camera location in horizontal (X, Y) as a root mean square error at approximately 5.5 inches, and 15.8 inches in vertical (Z). The absolute accuracy was calculated as the root mean square error difference between the image location recorded by the navigational GPS and the corrected image location calculated during map processing. The ground sampling distance of the imagery captured was approximately 2 inches per pixel (see Section 6.4.1.6).

In total, 84 potential adits or shafts were identified at the site. Forty-one features were considered to have a high probability of being a mine feature, and an additional 43 features were suspected of being a mine feature. Data from the drone survey, combined with percent slope and the known hydrology (local surficial drainage patterns), were used to develop and prioritize a list of features for investigation and closure. Note that the percent slope calculated from the data can be used to support plans for hiking or driving into the area by identifying potential access routes. 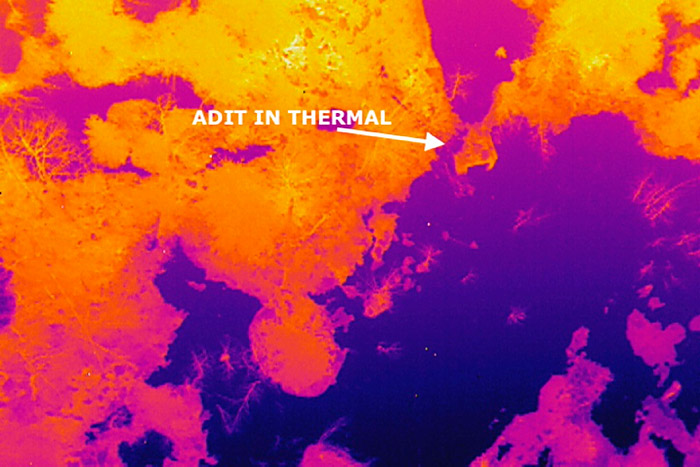 The processed orthomosaic imagery was brought into a web-based/mobile GIS platform (ArcGIS Online) using a Web Tile Layer created by DroneDeploy (see Figure 9‑67). The unprocessed geolocated images were also brought into GIS and provided as a final data product. Therefore, field teams working at the site could view all imagery to be viewed on mobile GIS equipment (an iPad Pro with a Bluetooth connection to a Trimble R1 GNSS receiver). The integration of this digital data continues as part of site management and is available to support remedial efforts and facilitate optimization of actions in support of remediation. 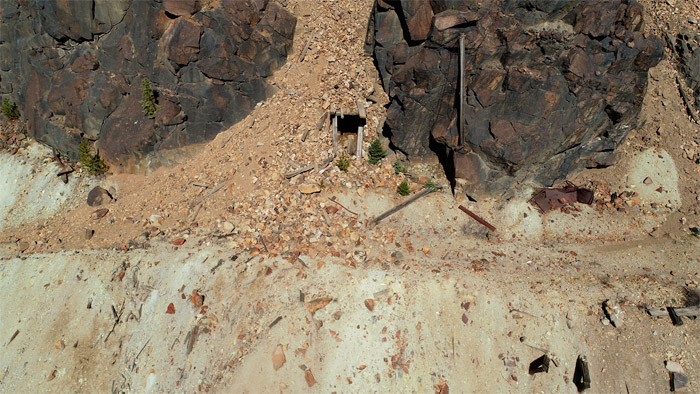 Figure 9‑68. Mine opening only visible from oblique imagery.

When compared to reviewing historical aerial imagery or maps alone, the method used provided distinct advantages, including, but not limited to, the following:

In total, the effort cost approximately $60,000, including developing a flight plan, collecting samples, uploading data for cloud-based processing, paying fees associated with equipment and data processing, performing a quality review of processed data, conducting analysis and interpretation, integrating data into mobile/web-based GIS, and developing online reporting tools. The total cost does not include mobilization to the site or additional reporting efforts beyond the initial characterization.

An estimate of costs to survey the 450 acres on foot is $40,000 and includes significant safety hazards with potentially inadequate data results. Flying the site with new aerial imagery is not a practical option given the scale of the site and the extreme topography. In addition to replacing a manual survey, the savings associated with the application of this technology and improved efficiency are difficult to calculate but presumed beneficial. Also, a reduction in costs associated with the reduction and treatment of acid mine drainage water over time should be considered.