Historical use of tetrachloroethene (PCE) at the Savage Municipal Water Supply Superfund Site in Milford, NH has impacted the overburden and bedrock aquifers underlying the site and a nearby municipal water supply well and resulted in a groundwater contamination plume approximately 6,000-ft long. Figure 9‑35 shows the site location. Geology at the site consists of highly transmissive glacial outwash and a relatively thin discontinuous till unit overlying fractured crystalline bedrock. 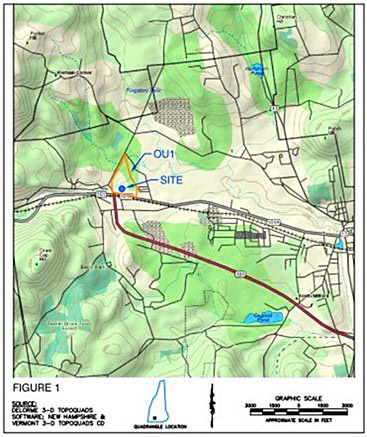 Based on previous investigations, the final remedy selected for the site included institutional controls, a subsurface barrier (slurry) wall to isolate the source area, groundwater extraction wells (inside and outside the barrier), soil vapor extraction, air sparging, and groundwater monitoring. The treatment system, which has operated since 1999, successfully reduced VOC concentrations in groundwater outside the barrier wall to below drinking water standards at nearly all monitoring wells screened within the unconsolidated deposits.

Site geology consists of a 50 to 110 ft thick highly transmissive sand and gravel glacial outwash and a relatively thin discontinuous till unit (<10 ft) overlying fractured crystalline bedrock. Historically the aquifer present within the unconsolidated deposits has generally been divided into three units, including the shallow overburden (0-30 ft below ground surface), intermediate overburden (30-70 ft below ground surface), and deep overburden 70-110 ft below ground surface). The initial CSM for the site assumed that the deep bedrock was highly competent with few fractures and that the remaining source of chlorinated solvents, possibly DNAPL, was located in the unconsolidated deposits. It was believed that VOCs would not migrate into the bedrock aquifer unless hydraulic containment was not maintained, and downward hydraulic gradients were allowed to develop inside the slurry wall. Therefore, the vertical extent of characterization activities was limited to the deep unconsolidated deposits directly above the bedrock surface and the shallow bedrock aquifer (<50 ft below the bedrock surface). Initial results from these wells identified VOC concentrations that were several orders of magnitude less than those observed in the sand and gravel overburden aquifer. Although VOC concentrations in shallow bedrock wells historically had been significantly lower than those in overburden wells, increasing VOCs concentrations continued to be observed over time in the shallow bedrock monitoring wells after remedy implementation. In addition, expanded residential development has occurred to the north and northwest of the site and these homes rely on individual deep bedrock wells for potable water.

This investigation expanded upon both the lateral and vertical extent of the previous characterization of the bedrock aquifer performed during the RI. Bedrock monitoring well installation, borehole geophysical logging, packer sampling, and a pumping test were all performed to help refine the bedrock CSM. These tools were used to evaluate the bedrock fabric, fracture geometry, and groundwater quality, as well as identify hydraulically active fractures within each monitoring well, and assess the anisotropy of the bedrock aquifer.

Several bedrock monitoring wells were installed, and one existing monitoring well was deepened as part of the investigation. Depths of the investigations were based on the documented construction of the residential water supply wells to the northwest of the Site. Immediately following installation, a standard suite of geophysical logs was completed at each location including borehole caliper, fluid temperature/resistivity, natural gamma, OTV, ATV, and HPFM. HPFM readings were collected under both ambient and pumping conditions. The borehole caliper, OTV, and ATV logs were used to identify bedrock fractures, foliation and bedding within each borehole and their orientation. Natural gamma and OTV logs provided information regarding the lithology of the bedrock formation beyond the classification of drill cuttings during well installation. The fluid temperature/resistivity and HPFM logs were used to identify hydraulically active fractures within each borehole by detecting flow into or out of the boreholes.

During the pumping test, water level monitoring was expanded to evaluate piezometric head variations within the deep unconsolidated deposits directly above the bedrock surface, shallow bedrock within the upper 50 ft of the bedrock formation, and deep bedrock zones in response to the applied stress on the deep bedrock source well. The HPFM was used within multiple deep bedrock boreholes prior to the culmination of the pumping test to evaluate inter-fracture flow under pumping conditions.

Borehole geophysical logging identified an overall fracture strike direction of northeast-southwest and a primary dip direction to the northwest with a lesser number of fractures dipping to the southeast. Fractures identified during the analysis are moderate to steeply dipping (55º to 70º). HPFM testing did not identify ambient vertical flow at the Site suggesting near-horizontal flow in the bedrock but did identify multiple inferred transmissive zones within each well under pumping conditions. Figure 9‑36 is a rose diagram presenting the geophysical fracture analysis for the entire Site. A short sample of a well log is also included. 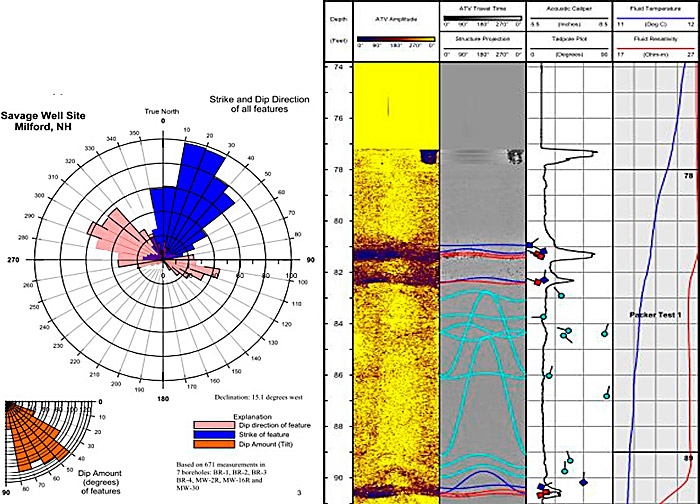 Reported concentrations of PCE in bedrock groundwater ranged from below laboratory detection limits to approximately 100,000 ppb. Concentrations of this magnitude suggest DNAPL may be present in the deep bedrock beneath the source areas. Samples collected during the packer testing identified PCE concentrations generally increasing with depth in source area wells and decreasing with depth in peripheral wells. This observation within source area wells would be expected given the higher specific gravity of chlorinated hydrocarbons and the moderate to steeply dipping fracture network. The rapid decrease in contaminant concentrations in peripheral wells suggests a significant vertical component to the contaminant migration. No Site COCs were identified in the proximity of the residential area to the north and northwest of the Site.

Groundwater elevation measurements at the culmination of the aquifer test indicated an elongated pattern to the groundwater surface with the axis in the south-southwest to north-northeast orientation. This pattern is illustrated on Figure 9‑37 and differs from the inferred easterly direction of groundwater flow under static conditions; however, the asymmetrical cone of depression correlates with the fracture strike orientations measured during the borehole geophysical logging. This identifies the anisotropy of the bedrock aquifer, a preferential pathway for contaminant migration at the Site. 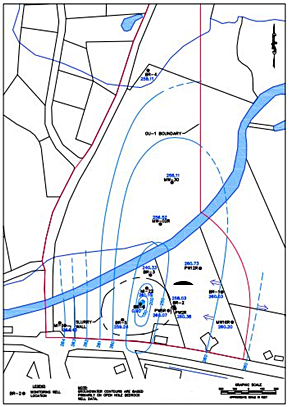 The characteristic purple color of sodium permanganate (NaMnO4) was observed in purge water approximately 2 hours after the start of the pumping test. Sodium permanganate was applied to the deep overburden aquifer within the barrier wall during an ISCO program implemented between 2008 and 2010. The observation of NaMnO4 in the deep bedrock during the pumping test illustrates the significance of the hydraulic connection between the pumping well and the deep overburden within the barrier wall.

Although groundwater elevation data did not identify any observable impact to the overburden aquifer during the pumping test, the rapid presence of NaMnO4 in purge water indicates that when a stress is applied to the bedrock aquifer, the overburden is a significant source of recharge. In addition, the lack of NaMnO4 presence at the start of the test indicates that the natural head distribution may not allow the oxidant to flow there. The lack of influence to groundwater elevations for wells screened within the unconsolidated deposits is not surprising due to the saturated thickness (~85 ft), high hydraulic conductivity (>1,000 ft/day) of the overlying sand and gravel aquifer, and the magnitude of difference of storage coefficients between the overburden and bedrock aquifers. These characteristics would mask the minimal influence resulting from a 10 gpm withdrawal.

Analytical results from samples collected during packer-interval sampling suggest that very high concentrations of chlorinated hydrocarbons are present in the bedrock beneath the source area within the barrier wall, possibly in the form of DNAPL. Downhole geophysics data from deep bedrock boreholes indicate that most shallow fractures are steeply dipping; which is consistent with the presence of high contaminant concentrations in the deep bedrock fractures in the proximity of the overburden source area, because these fracture characteristics would facilitate the vertical migration of contamination into the deep bedrock within a short distance of the source area. The significant reduction in contaminant concentrations with respect to distance from the source area suggests that there is a stronger vertical component to contaminant migration than lateral.

The results from the pumping test and water table elevation monitoring identified clear north-northeast anisotropy to the bedrock aquifer, which correlates with rose diagrams generated with fracture strike/dip information compiled during the borehole geophysics program. This anisotropy represents the most significant contaminant migration pathway at the Site. Results from the HPFM testing conducted during the pumping test identified a lateral connection by way of deeper fractures. In addition, the primary source of recharge to the bedrock aquifer is from the overburden via a network of shallow fractures. Shallow recharge was observed in each of the wells that exhibited drawdown during the pumping test. Although the deep overburden is a primary source of recharge to the bedrock aquifer as evidenced by the presence of NaMnO4, the pumping test did not result in influence on the water table elevation in the unconsolidated deposits. This lack of impact to overburden groundwater elevations is not surprising due to the large saturated thickness, high hydraulic conductivity of the overlying sand and gravel aquifer, and the magnitude of difference of storage coefficients between the overburden and bedrock aquifers.

The data obtained from this investigation provided critical information to refine the CSM for the Site. The updated CSM indicates that significant contaminant concentrations exist in deep bedrock, including the possibility of DNAPL, representing a secondary, ongoing source of groundwater contamination. Mapping of the bedrock fracture system has identified a higher frequency of shallow but steeply dipping fractures that tend to promote vertical migration of the impacted groundwater and a deeper system of fewer fractures that are less steeply dipping and tend to allow more lateral migration. A strong north-northeast trending anisotropy was identified in the bedrock that represents the most likely direction of lateral contaminant migration in deep bedrock.

The findings of this study resulted in the completion of a RI/FS for the bedrock aquifer at the Site. Several remedial alternatives were evaluated as part of the RI/FS process, and the updated remedy for the Site includes bolstering of the slurry wall containment system, additional oxidant injections, and continued operation of the groundwater extraction system at the Site in conjunction with a Technical Impracticability (TI) waiver.

The Use of Specific Capacity to Assess Transmissivity in Fractured-Rock Aquifers, Huntley, David, Roger Nommensen, and Duane Steffey, 1992, Ground Water. Vol. 30, No. 3, pp. 396-402.