At a site in a mixed commercial and residential area in northern Virginia, a recent assessment identified MTBE in bedrock groundwater at locations cross gradient to groundwater flow. Based on these results, additional bedrock monitoring wells were needed. Area mapping and local reconnaissance, in combination with borehole geophysical and aquifer testing, indicated that relatively discrete, steeply dipping fractures were potentially responsible for both movement of contaminated groundwater from the overburden to bedrock and transport of MTBE away from the site. Surficial geophysical technologies were selected to allow the determination of appropriate and feasible monitoring well locations and because the methods overcame the following site-specific challenges: density of development in the area; the proximity of potential receptors (private potable wells)’ and properly identifying top of bedrock, potential fractures, and feasible drilling locations. In addition, the methods needed to be acceptable to the regulatory authority, understandable to the public, readily available, and cost effective.

Seismic refraction (SR), ER, and MASW were used to identify potential monitoring well locations. A total of 550 linear ft of ER survey, 1,500 linear ft of MASW, and 2,100 linear ft of SR were performed over three days along roadways or through commercial parking lots.

Based on the initial data described above, two ER lines were conducted south of the site using an Advanced Geosciences SuperSting™ R8 earth-resistivity meter and Swift automatic electrode system in dipole-dipole arrangement (see Figure 9‑51). Approximately 3,000 soundings were collected. The electrode spacing (dipole size) was 6.6 ft to 10 ft and used 32 and 35 electrodes. ER data, when analyzed, identifies contrasts in the conductivity (inverse of resistivity) of the subsurface. Patterns in the contrast of conductivities are a line of evidence to the location of clays, bedrock, and potentially saturated fractures. The end result is an illustration of basic stratigraphy of the study area. 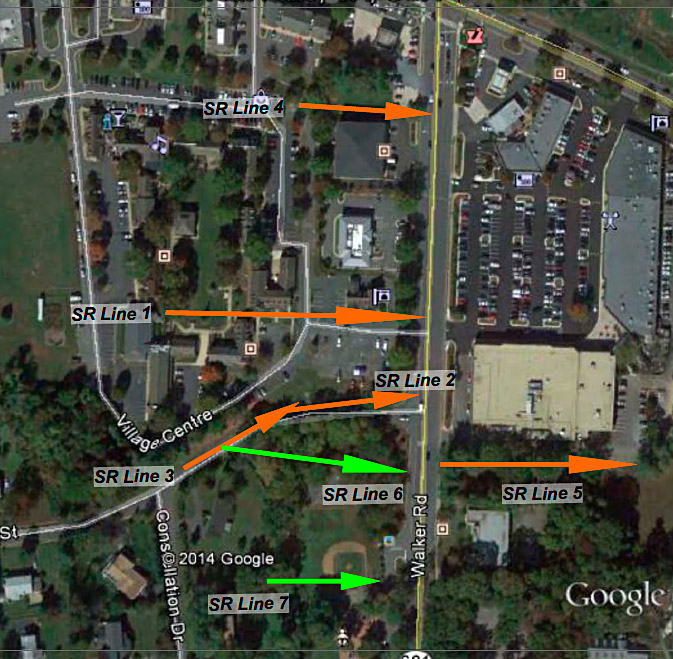 Seven SR lines were conducted using a 24-channel Geode Seismograph with 10-Hz geophones and a 10-pound manual hammer. Two of the SR lines were conducted in a roll-along setup to maintain vehicle traffic in the public roads. Each line used 10-foot geophone spacing and five source locations. SR ER data, when analyzed (see Figure 9‑52 for an example), identifies differences in seismic velocity due to the bending of seismic waves as identified by the time required for the signal to travel from the source (hammer) though the subsurface and to the receiver (geophones). Patterns in the contrasts of seismic velocities can indicate the depths and locations of weathered and competent rock as opposed to overburden unconsolidated materials. The end result is an illustration of the stratigraphy of the study area. 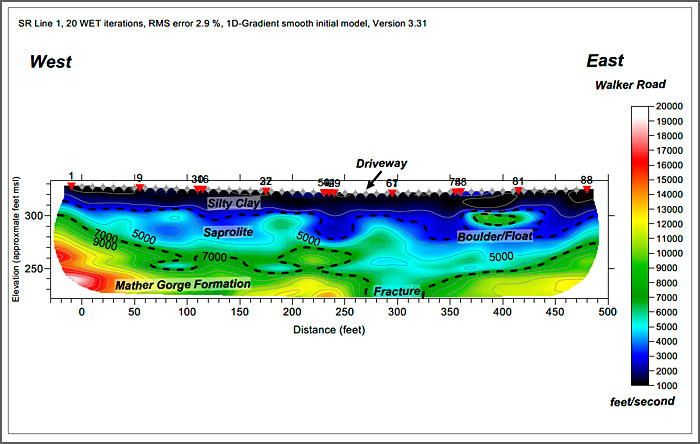 Five MASW lines were conducted. Data collection was performed using a 24-channel Geode Seismograph with 10-Hz geophones and a 12-pound hammer. Sources were placed at each end and on 10-foot centers. MASW uses the surface wave component of the seismic signal, in conjunction with the body-wave component used by SR, within a frequency/velocity model to identify anomalies in the stratigraphic model developed using SR. These anomalies can represent fractures or fracture zones, especially those that intersect the top of the competent bedrock as determined by SR and ER (see Figure 9‑53 for an example). 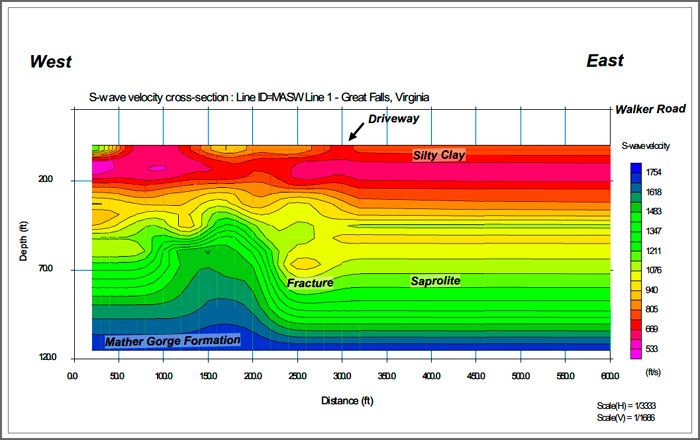 Surficial geophysical results allowed the identification of a trend of anomalies categorized as a fracture zone and the subsequent determination of monitoring well locations. The justification for these locations was easily understood by the regulator and public because of the developed figures. The figures provided documentation of the various lines of evidence offered by each technique, profiles of the interpreted subsurface, and plan shown on an aerial photo base. This approach became the basis for installing sentinel monitoring wells between the site and potential receptors and served as an important component when presenting the CSM subsequent meetings.

The cost of the geophysical survey was approximately $15,000, which was less than one-half the cost of a single well and provided important assurances to all stakeholders that the selected monitoring well locations were appropriate.