The largest aviation industrial complex on the west coast is located in San Diego, California, and surrounded on three sides by San Diego Bay and the Pacific Ocean. The site is located on relatively flat land with an average elevation of approximately 20 ft above sea level. The site has been graded for development using hydraulic fill consisting of medium- to coarse-grained, poorly graded sands and silty sands. In some areas, the fill is underlain by organic silts and clays.

An operable unit, located in the northeastern portion of the site, is in a heavy industrialized area with several processes including aircraft testing, maintenance shops, and associated chemical storage tanks and pipelines. The groundwater level in this area is approximately 5 ft above mean sea level. The groundwater gradient is relatively flat, from 0.001 to 0.002 foot per foot. Groundwater flow direction is to the north/northeast and discharges into the San Diego Bay. The primary groundwater contaminants are chlorinated VOCs and hexavalent chromium. A chlorinated VOC plume in the area is over 0.5-mile long and is believed to migrate into distinctive zones. For example, immediately downgradient of the source area, the plume migrates into a narrow band 200-ft wide but reduces in width more than 50% further downgradient where it also appears to migrate deeper.

To address data gaps pertaining to both the stratigraphy and contaminant distribution in the area, CPT borings were advanced and hydropunch samples were collected (see Figure 9‑32.). Because the utility corridors on site make well installation difficult and, in some cases, prohibit use of a traditional drill rig, the smaller footprint of a CPT rig allowed access in these tight areas. The stratigraphic data obtained were used to prepare cross sections and helped to determine that downward migration was due to structural or depositional features. CPT boring and Hydropunch data were used to assess areas of interest without having to collect soil samples and determine well-screen intervals. As a result, specific zones of interest were identified and sampled quickly and fewer permanent wells were needed.

An additional 10 CPT borings were advanced in a row downgradient of the plume to evaluate soil and analytical results. The screen intervals for these wells were based on CPT boring data and hydropunch sample concentrations. The advantages of using CPT borings at this location are as follows: 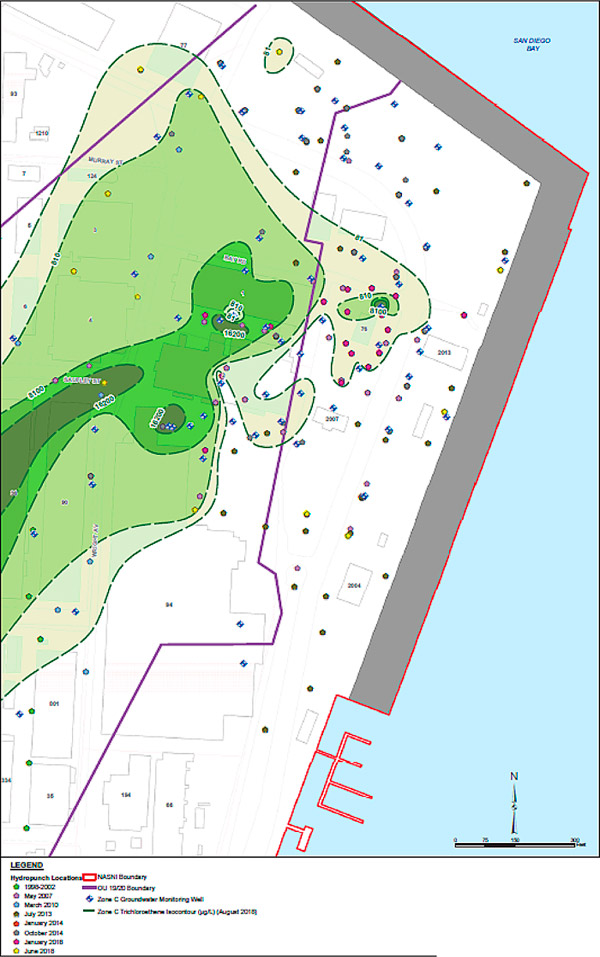