Releases of creosote are suspected to have occurred at a creosote wood preserving facility (Bayou Bonfouca Superfund site) in Slidell, Louisiana, during its operational life from the late 1800s through the early 1970s. A fire occurred at the facility in the early 1970s and caused several large tanks to rupture. Creosote flowed across the site and into Bayou Bonfouca, contaminating soil, the bayou (creek and channel bottom sediments), surface water, and groundwater. The facility was abandoned after the fire.

Several investigations were completed from 1976 to 1987, and the site was added to the National Priorities List in 1982. In 1991, groundwater treatment was initiated as a remedy to clean up the creosote groundwater plume.

The groundwater treatment system continues to operate at the facility. The system recovers groundwater from two on-site recovery well arrays (arrays 1a and 2) and one off-site array (array 3) located on the opposite bank of the bayou. Approximately 100 gallons of DNAPL are recovered every month from the treatment system, and DNAPL has been observed in recovery wells in all three arrays (see Figure 9‑27). 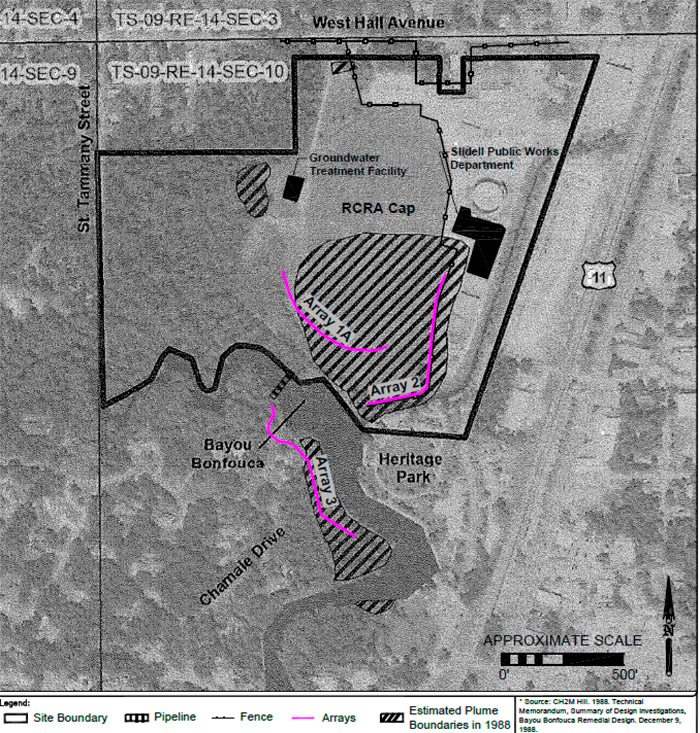 Recent evaluations provided information showing that groundwater cleanup goals have not been met. An assessment of remedy effectiveness showed that the pump-and-treat system is restricting DNAPL plume movement rather than remediating the plume as intended.

An investigation using TarGOST in conjunction with the HPT was performed in 2018 to approximate the extent of subsurface DNAPL and assist in assessing the effectiveness of the current remedy.  The tar-specific Green Optical Screening Tool (TarGOST) tool was selected to conduct subsurface screening in an effort to delineate the current extent of the DNAPL plume associated with the site.  The initial objectives of the investigation included:

The HPT was added to the screening effort to estimate hydraulic conductivities and the complex fluvial subsurface lithology, which consists of inconsistent interbedded sand, silt, and clay that can trap DNAPL in unexpected locations.

The TarGOST tool was selected to characterize in situ DNAPL due to proven performance at another creosote site in Louisiana, its selective detection of creosote, its ability to provide immediate data, and its ease of use via direct push methods.  In addition, minimal investigation-derived wastes are generated. The TarGOST system makes direct fluorescence measurements by directing fast pulses of 532 nanometer (green) laser light onto the soil through a sapphire windowed probe.  If creosote is present, the polycyclic aromatic hydrocarbons in it will absorb some of the light and emit pulses of fluorescence that are detected back through the window and are recorded by the TarGOST’s time-resolved detector. The HPT was added to the screening effort to approximate hydraulic conductivities and to estimate the complex fluvial subsurface lithology, which consists of inconsistent interbedded sand, silt, and clay that can trap DNAPL in unexpected locations.

Prior to field work, the fluorescence response of a sample of recovered creosote was measured via TarGOST. The resulting response was high, indicating that TarGOST would readily detect the NAPL in situ. The field survey was initiated in March 2018. Screening was conducted using the TarGOST within the footprint of the DNAPL plume as estimated in 1988. Thirty-three locations were screened during five days in March and April 2018. An additional 14 locations were screened during four days in November 2018 (see Figure 9‑28). The maximum screening depth was 55 ft below ground surface, coinciding with a clayey cohesive unit into which the creosote has not historically penetrated. Confirmation soil and groundwater sampling, as well as soil logging, were conducted at approximately 25% of the screening locations to confirm the TarGOST observations and identify contaminants within the creosote plume. 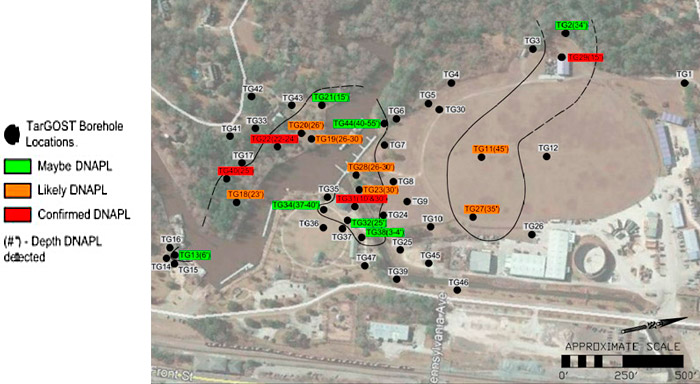 While the DNAPL plume has not been fully delineated, the TarGOST defined the extent and relative amount of DNAPL present at sampled locations both on and off site (see Figure 9‑29). This information will be used when evaluating the effectiveness of the current remedy. The HPT confirmed the site lithology that was described in the 1980s and 1990s. 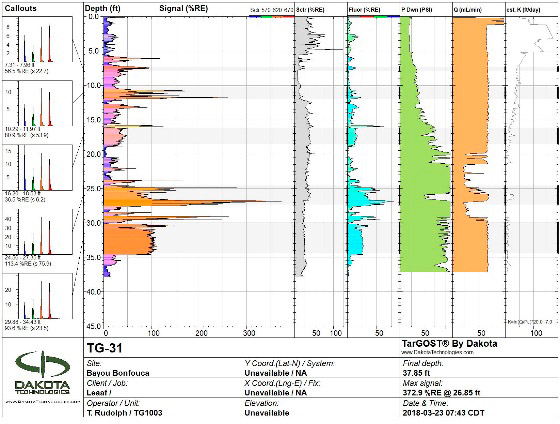 Natural organic material can and does fluoresce similarly, but not identically, to creosote, and this occurred to some extent at this site. Organic clay, which exhibited high fluorescence, was observed in confirmation samples at one location. Roots and organic debris, which exhibited variable fluorescence, were observed in confirmation samples at several locations (see Figure 9‑30 and Figure 9‑31). The time-resolved fluorescence waveforms generated by the TarGOST, along with advanced analysis of these waveforms such as cluster diagrams, played a key role in discerning between the target DNAPL and organic matter. Confirmation sampling was essential to eliminate false interpretation of organic matter fluorescence. For each log with a response that was not confirmed with a soil boring, a determination as to whether DNAPL was “maybe present” or “likely present” was made based on the degree to which the unconfirmed logs were similar to the logs for confirmed DNAPL. 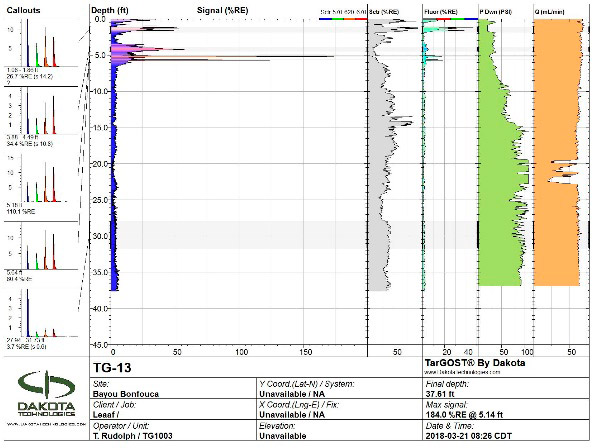 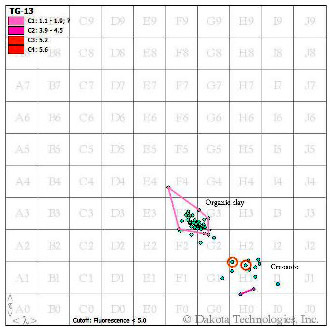 The total costs for the two TarGOST screening investigations, including soil and groundwater confirmation sampling, at the site was approximately $233,000. Specifically, the cost of the TarGOST equipment, operator, direct-push rig, and crew totals approximately $7,000 per day. The remaining costs included personnel; analytical for ash characterization, soil, groundwater, and sediment sampling; on-site utility location; and characterization and removal of investigation-derived wastes. Cost savings could be affected by reducing the number of confirmation samples to the minimum recommended (10%).

The advantages of using TarGOST at this site were as follows: